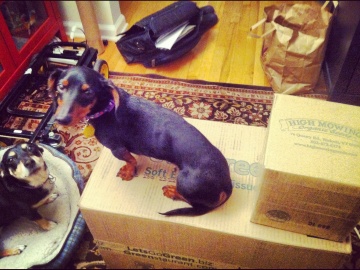 I suppose this is as good a way as any to start this new blog; it is certainly better than waiting around for the perfect inspiration or appropriate topic.  Today I received two very exciting packages: A) a box from High Mowing Organic Seeds and 2) a box of recycled toilet paper.  This says to the mailman, Sean, “Yes we are kind of crunchy and no we don’t have time to go to the store.”  I like using our mail as a way to update the neighbors on the goings-on in our household and as a way to tell them about us without actually having to talk to them.  If I had to talk to them, they might tell me that they don’t approve of my barking dogs, long grass, unweeded driveway, the vegetable garden that is remarkably close to the front yard, and our compost bin (the last two are, of course, prohibited in this city).

We occasionally get organic produce deliveries which tell the neighbors that we’re tech-savvy and serious about our pesticide intake.  Then there’s the huge packages from Home Depot that they watch me struggle to pull into the house on my own, which tells them that someone in the house likes to do things his-or-herself and also that I cannot lift more than 40 pounds.  There’s the Coldwater Creek and Lane Bryant boxes which confirm that the ladies in the house are in fact plus-sized and that one of us probably has a new job/internship/interview or that I’ve run out of underwear again.  They know that we have an Amazon addiction and while they don’t know what we buy, they can assume by the frequency of deliveries and package size that it is probably toothpaste, books, and cat food.  They would be right. 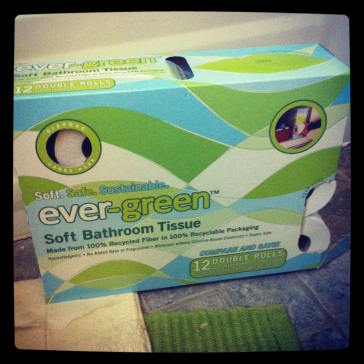 These last two packages tell the neighbors a few more things about us.  First, the recycled toilet paper tells them that I prefer to buy in bulk and that I hate superfluous plastic packaging and virgin bleached paper so much that I’m willing to wipe my lady-parts (that’s right, it’s that kind of blog) and stuffy nose with toilet paper that resembles the last parking ticket I received more than any kind of cottony-soft like an angel or an adorable dancing bear’s personal paper products that may or may not have been quilted by tiny grandmas in the oak tree out back. (I forgot the golden retriever puppies, but hopefully you get the idea.)  The High Mowing Seed box tells them that I am serious enough about gardening that I am throwing down my first ever cover crop, oats, as a green manure to prepare for next season.  And that I’m attempting to plant garlic, my first ever fall/winter crop.

The neighbors see that I live in this house with a man, Sammit, who my mailman knows I’m married to after all those save-the-dates, invitations, RSVPs, and Thank You! cards he lugged around in the Summer and Fall of 2010.  They also either realize that I live with another woman or they get really confused about my hair length and dress style changing so rapidly, sometimes several times in the same day.  The mailman can probably deduce that she is my sister given our last names are the same and our parents named us Dillon and Devin.

They also see that Sammit works nights and is at least pretending to be a doctor given his white coat and over abundance of scrubs.  I would have my doubts too though; he is way too silly to be an actual medical professional.  I think he goes somewhere each night to play Borderlands and knocks over a gas station on the way home in order to fake a salary.  They see that on those nights when Sammit works, if I leave the front window shade up, that I spent most of it not cleaning but reading on my computer with a documentary, television series, or RuPaul’s Drag Race on the TV in the foreground.  They probably don’t know what I do given the inconsistent schedule and long breaks I have as a student.  And they have no idea what Devin does but they do get irritated when she parks her car in front of their house too long (they leave notes).

They know that we recycle everything, forget to take the trash out most weeks, and that our pets escape the house/yard unexpectedly and have to scour the block in our pajamas while shaking treat-bags.  They see that we have an annual pumpkin carving party (except this year – sad – ) and we celebrate Indian/Hindu as well as American secular holidays and solstices.

So, that’s kind of what you would know about my family if you were our neighbors.  But you’re not our neighbors, at least I don’t think you are, so you’ll probably learn a lot more if you stick around.  You can start by checking the About Us page.